This post is linked at “WWW Wednesdays”, a weekly reading meme hosted by Should Be Reading. All the links take you to GoodReads.

I am currently reading

Snuff
(A Discworld Novel)
By: Terry Pratchett
Genre: Comic fantasy
From: My bookshelf

It is a truth universally acknowledged that a policeman taking a holiday would barely have had time to open his suitcase before he finds his first corpse.

Commander Sam Vimes of the Ank-Morpork City Watch is on holiday in the pleasant and innocent countryside, but not for him a mere body in the wardrobe. There are many, many bodies – and an ancient crime more terrible than murder.

Guys, I started reading yet another book! Last weekend I was going to visit another town (to see Rocky Horror, woot!) when at the station I realized I had packed no entertainment for the train ride. Shock & horror! So I went to the the station’s paperback store and picked up Snuff.

I had been craving for Pratchett for a while, and even though I haven’t yet read Making Money and Unseen Academicals, the two previous installments, I had read the previous Vimes/Guards book, Thud!, and that is all you need to read this Vimes book. I like that Pratchett has so many different character storylines to follow in the Discworld novels, so you can choose whether you want to read say, a Death book, or the witches, or a wizards book. I’m having much fun so far, and I love how Pratchett always seems to a have a more serious theme under all the comedy, especially in his later books.

Saga, Vol. 2 by Brian K. Vaughan & Fiona Staples
I still like the people hunting the main couple more than the main couple. Especially Prince Robot IV – he’s more or less the reason I keep on reading.

So Long, and Thanks for All the Fish (Hitchhiker’s Guide #4), by Douglas Adams
Hoping to finish my re-read round of the series this year! I love the biscuit eating story in this one…

Next I hope I’ll finish all three (!) books that I’ve started but not finished! That is, The Fractal Prince by Hannu Rajaniemi, The Name of the Wind by Patrick Rothfuss and Great Expectations by Charles Dickens. Wish me luck!

Hope you all have a great reading week!

Time for a book haul! I’ve been irresponsible and bought new books to fill my already full bookshelf. (Some of them were free, though…) I need to get reading! 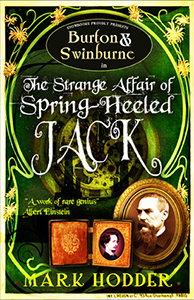 At the beginning of the month, I had this “wonderful” idea of choosing a random book from my GoodReads To Read shelf in order to bring it to a more manageable size. So I hit a random number generator online, chose a book corresponding that number, and it happened to be The Strange Affair of Spring-Heeled Jack. Now, my library doesn’t carry it, so I bought it for my Kindle. Right after this, all my reserved books from the library arrived, so I didn’t even get started with this one. Which means that my grand plan to shorten my TBR list only lead to me buying another book to add to the ones I’ve bought this year and not yet read… Fail.

These are the books that came from the library. I’ve been waiting for The Drowning Girl to arrive since February, and it finally did. This book has won and been nominated for a bunch of fantasy and horror awards. I just love Kiernan’s spell-binding writing style, and can’t wait to get to this! And of course right at the same time that this arrived, Poison Study finally reached me on the reservation list… And when I went to get them, Legend was just sitting there on the shelves, so I picked it up as well. So these three books are the next to be read.

The Raven Boys by Maggie Stiefvater
The Bromeliad Trilogy (including Truckers, Diggers and Wings) by Terry Pratchett
The Lies of Locke Lamora by Scott Lynch

Two of these three books were free! \o/
During The Night of the Arts in Helsinki, my bookstore had all paperbacks for -20%. That is why I decided to pick up The Raven Boys, craving for a fantasy book in a school setting. I didn’t like Stiefvater’s Shiver, but I thought she might have matured as a writer since then and will give her another chance. Buying The Raven Boys also filled up my paperback stamp card (buy 8, get 1 free), so I picked up The Lies of Locke Lamora, a high fantasy book that I’ve been meaning to read for a while.

Some time later I was walking through town and stopped by at this spot where people can leave their old books (sort of like a BookCrossing station), and found Pratchett’s The Bromeliad Trilogy, which I have never read. It is a huge book, and now my bookshelves are fit to burst, so I should definitely lay off reserving library books for a while, and focus on reading what I’ve bought… Right after my latest reservation, The Cuckoo’s Calling, reaches me. ;)

This haul is linked at the weekly haul memes Stacking the Shelves, hosted by Tynga’s Reviews, and Showcase Sunday, hosted by Books, Biscuits, and Tea.

My name is Maija and I read mostly fantasy - epic and modern, books and graphic novels, adult and ya, anything goes. I'm currently posting mostly my 2017 #MountTBR progress. On other book-related topics I'm more active on my Youtube channel (link below).